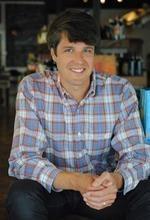 Camden has a passion for homes and design and for building strong relationships with clients.  This passion along with his insight and knowledge of the market have established him as a successful top producing real estate professional.  Anative of Winston-Salem, Camden grew up in the Ardmore neighborhood and is a graduate of RJ Reynolds High School.

He went on to receive his Bachelor’s Degree from Appalachian State University.fter graduation in 2008, Camden returned to his hometown where he met his wife Mary, a fellow Winston-Salem native.  They now reside in the historic Washington Park neighborhood along withtheir two children, Denver and Marlowe.  Camden enjoys music, cultural pursuits, modern art, and slow food.  Prior to becoming a full time realtor, he worked as a brewer at Foothills Brewery.  After that, he

He is enthusiastic about the city of Winston-Salem and has a firsthand knowledge of all the city has to offer.  His excitement and love for the community are apparent when he works hard to help his clients find the perfect home.  He keeps his finger on the pulse of the city and loves being part of Winston Salem’s consistent growth and economic diversification.